Smooth, slippery, and slimy to the touch, leather sea stars (Dermasterias imbricata) are named for the texture of their skin, which feels like wet leather! They are members of the echinoderm family, which includes other sea star species as well as sea urchins and sand dollars. They have all the common traits of echinoderms, including no vertebrae and radial symmetry. Sea stars are unique within their family and the animal kingdom because they do not have any blood in their bodies. Instead, they use sea water to move nutrients, waste, and dissolved gasses through their bodies.

Leather sea stars secrete a thick mucus to cover their bodies, which are also covered in surprisingly soft and smooth skin. The combination of skin and mucus creates the leather-like texture that gives them their namesake. They have five arms surrounding a central disc, which contains their mouth and stomach. On the base of each are two rows of tube feet that they use to walk around on the seafloor. They have six to eight rows of papulae on each arm, which are organs used for respiration in a way that is like gills of fishes. The upper part of their bodies is a mottled blue gray with red-orange mottling. They can reach lengths of nearly a foot, but are closer to six inches long on average. Interestingly, this sea star has earned the nickname of the garlic star because of a pungent, garlic-like smell they produce.

To forage, leather stars use sensors at the end of each arm to detect prey. However, some sea anemones have adapted and when they sense the chemicals produced by the leather star, they can detach themselves and float to safety.

Leather stars have a range along the United States’ Pacific Coast from Prince William Sound, Alaska down to San Diego, California. They live on rocky shores and on pilings and sea walls in enclosed harbors. They seem to prefer the very low intertidal and shallow subtidal zones to 300 feet. They will live in larger aggregations and times but are not social animals.

Scientists still have much to learn about the life cycle of leather starfish. We know that they can reproduce asexually by cloning and sexually by releasing gametes into the water column. Sexual reproduction seems to occur in warmer months when environmental conditions are favorable and food is plenty. We don’t know if there are other conditions like lunar cycles that might influence leather seas star reproductive behavior. Fertilized eggs are small, translucent, and yellow-orange in color, and they are carried away by the current. Eggs that aren’t eaten or damaged in transit often stick to anchored structures like plants, rocks, or pilings while they incubate. A few days to weeks later, leather sea star larvae hatch and begin their lives as important marine invertebrates! After several transformation, leather sea stars reach their juvenile and then adult stages. They reach sexual maturity at about two years old and can live to be as old as 35 (or even older)!

Leather stars are hardy animals given their regenerative abilities and few predators, however, their populations do face threats now and in the future. As important scavenging species that keep their ecological niches in balance, any imbalances in leather starfish populations can have ripple effects throughout the food web. Climate change, coastal development, marine pollution, human interactions, and ocean acidification are just a few threats that relate to leather sea stars. We can take actions now to prevent any future harms to this and other marine species no matter where we live. These include choosing not to litter, recycling where we can, carpooling and walking, refusing single use plastics, admiring animals from afar when we tidepool, snorkel, or dive, and minimizing our use of (or disposing of properly) toxic substances that can make their way into the ocean like fertilizers, batteries, antifreeze, and paint. 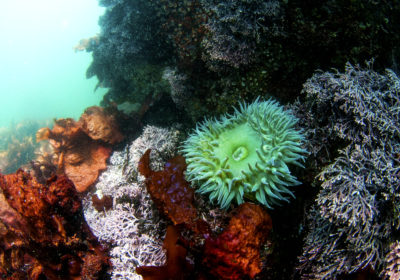