Whale sharks are the world’s largest fish, reaching lengths of more than 40 feet and weights of nearly 50,000 pounds, which is about the size of a yellow school bus. Their backs are blue-gray in color with unique distributions of white spots and stripes all over their bodies while their bellies are bright white. In the marine environment, having a darker back and a lighter belly is an adaptation called countershading, which helps animals blend into the environment and allow them to avoid predation or sneak up on their prey.

At the front of the whale is a gaping mouth and two small eyes, one on each side of the mouth, and the gills. They have two pectoral fins which help with steering and stopping, followed by dorsal fins about halfway and three-quarters down the back. At the end of its body is a vertical tail fin, which they move side to side to move through the water.

Whale sharks are one of only three species of filter feeding sharks, which means they spend much of their time swimming with an open mouth, sifting tiny plankton, fish, and sometimes an unlucky squid through their gills to get the energy and nutrients they need. These gentle giants have approximately 3,000 small teeth that line their mouths, but they don’t use them. Juvenile whale sharks are often preyed upon by blue sharks, basking sharks, and killer whales but adults aren’t likely to be hunted by anything other than humans.

Whale sharks are found in warm, temperate and tropical waters all over the world. Oftentimes they live in the open ocean, generally near the water’s surface since that’s where the plankton they eat live. Whale sharks are occasionally seen in Flower Garden Banks National Marine Sanctuary but have also been seen in the Florida Keys National Marine Sanctuary.

These slow swimming fish generally travel alone, but they do share feeding and breeding areas with larger groups of sharks. Shark pups are born live after hatching within their mothers’ wombs, and pups are about one and a half to two feet long at birth. The maximum lifespan of a healthy whale shark is estimated to be between 70 and 100 years old with juveniles reaching sexual maturity around the time they turn 30 or when they reach their full size.

Scientists continue to study whale sharks to learn more about this mysterious species, including their social behaviors, seasonal migration patterns, and development.

Booming tourism and whale shark fishing industries are threats to whale shark populations around the world. As a result, the IUCN lists them as endangered. Activities like hunting whale sharks for their meat, fins, and oil, unintentionally catching whale sharks in fishing gear, boat strikes, and other human disturbances. We can do our part to protect whale sharks and the animals that share their ecosystems by choosing sustainable and responsibly fished seafood, supporting policies that protect sharks, and choosing tourism operators that educate their guests and minimize their impact on the environment and the animals they take visitors to see. Flower Garden Banks National Marine Sanctuary has regulations in place regarding the prohibition of “killing, injuring, attracting, touching, or disturbing rays or whale sharks, except for incidental catch by conventional hook and line gear.” 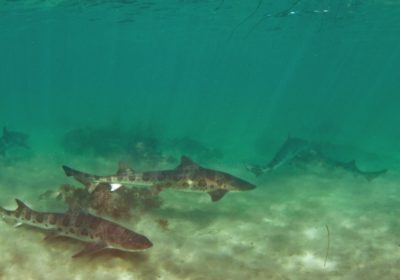