When life gives you lemons…remember these fun facts about lemon sharks!

Named for their distinct coloration, lemon sharks have a yellow hue to their skin, helping them blend in to the sandy nearshore areas where they often forage. Adult lemon sharks can grow to be as long as 10 feet in length and 200 pounds in weight, making this species one of the larger shark species in our ocean. Their heads are flat, their snouts broad, and their bodies stocky and muscular. They have two dorsal fins atop their bodies that are nearly the same size, a trait that isn’t common in other shark species.

Very rarely will lemon sharks venture out into deeper ocean waters. Lemon sharks usually live in subtropical coastal waters, calling mangrove forests, coral reefs, and river mouths — all excellent locations for foraging — home. Their preferred habitats make them one of the most commonly spotted and most studied species of shark in the world. In fact, visitors of Florida Keys National Marine Sanctuary and Gray’s Reef National Marine Sanctuary will likely see lemon sharks on a snorkel or dive excursion.

Lemon sharks are nocturnal hunters and fairly picky eaters. Their diet generally consists of easy-to-catch prey: bony fish, small and medium crustaceans, rays, cephalopods like squid and octopus, and sometimes even seabirds. To hunt, they identify an electrical signal from potential prey and will stalk their victim until they feel it is the right time to attack. Unlike other sharks that bite at their prey in smaller chunks, lemon sharks grab their prey whole and thrash their heads to tear its flesh.

Lemon sharks are highly social sharks with complex social norms, hierarchies, and cooperative strategies. They also have complex mating rituals as a result. One example is that of lemon sharks near mangrove forests: they will gather in large groups in the submerged roots of mangrove forests every two years and identify mates using electroreceptors, the same sensory organs they use to detect prey. Once a pair selects each other, mating rituals include activities like displays of dominance, coordinated dancing, biting, and other behaviors. Lemon sharks find multiple partners each mating season (a strategy to increase genetic diversity), which means a single litter of lemon shark pups can have multiple fathers.

The gestation period for a lemon shark is 12 months and the species is viviparous, meaning the eggs hatch in the womb and pups are born live.

Given lemon sharks’ proximity to human populations, they are often targeted by commercial and recreational fisheries. As a result, the species is listed as near threatened by the IUCN red list. Effective management and responsible fishing practices can help preserve and recover lemon shark populations to healthy sizes. 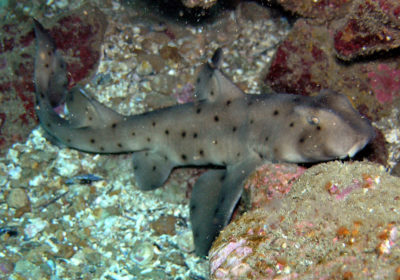