One of the world’s more unique shark species and considered one of the more docile species of shark, this week’s Creature Feature is none other than the nurse shark. The origin of this animal’s name isn’t entirely clear — it could have been named for the sucking sound it makes when it feeds or it may be based on the word nusse, which translates to cat shark.

Nurse sharks are a blend of grey and brown in color, have a flat, wide head and a long, flexible tail that can equal nearly one fourth of their total body length, and are smooth to the touch unlike other species of sharks. Adults range from 7 to nearly 10 feet in length and can weigh between 150 and 300 pounds. Females are usually larger than males when fully grown. Their teeth are small and sharp, but its most distinct feature is the barbels (sensory organs) that hang from its chin like the “whiskers” of a catfish.

Nurse sharks are opportunistic carnivores (they eat whatever animals are easiest to find and catch), but their diet mostly consists of fish, crustaceans, squid, and sometimes even coral. They are nocturnal hunters, meaning they are more inactive during the day and spend most of the night looking for food. To hunt, nurse sharks move along the seafloor using their barbels to detect prey, and when they find something they cup their mouth over the area and create a vacuum to trap their prey.

Unlike many other species of sharks, nurse sharks don’t have to stay in motion to breathe; they use a strategy called buccal pumping to remove oxygen from the environment without swimming.

Male nurse sharks reach maturity around 18 years old with females maturing in their early 20s. Females can give birth to a litter of up to 30 pups at a time, but generally give birth every other year.

Nurse sharks don’t generally have natural predators but have occasionally been found in the stomach contents of larger shark species. They don’t migrate far from their homes throughout the year and tend to be perceived as sluggish or lazy due to their preference for perfect resting spots throughout the day.

Nurse sharks can be found on both coasts of North America, thriving in warm, shallow waters. The sanctuaries in which you can generally find nurse sharks are: Florida Keys, Flower Garden Banks, Gray’s Reef, and Monitor. Scientists have observed nurse sharks in the Atlantic as far north as Rhode Island, which may mean they are sometimes present in Stellwagen Bank National Marine Sanctuary, but this is quite rare.

Nurse sharks are bottom dwellers, spending much of their time on reefs or coastal shelves around 50 feet deep or less. They don’t have an incredibly complex social structure, but are often found resting in groups of two to 40 individuals, using  nooks and crannies along the seafloor to hide.

Nurse sharks populations are generally stable, but they are vulnerable to factors that affect ocean and coastal health such as runoff and ocean acidification. The species is valuable to shark ecotourism, especially in the Caribbean, due to the fact that they are slow moving and approachable. However, nurse sharks do still have sharp teeth and have been noted harming humans when provoked. If you ever choose to see nurse sharks or any other wildlife on an excursion, remember to bring your Ocean Etiquette! 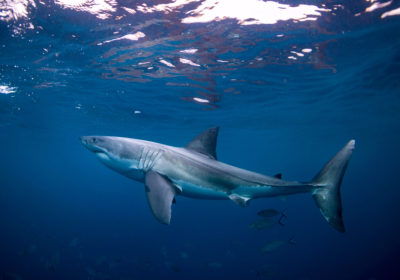