Rose Atoll Marine National Monument is one of four marine national monuments in the U.S. Pacific Ocean and lies 130 miles east of American Samoa’s Pago Pago Harbor. For reference, American Samoa is located between the Hawaiian Islands and New Zealand. This monument protects one of the most pristine atolls (ring-shaped reefs) in the world, an environment that supports a dynamic reef ecosystem, including a diverse assemblage of marine species. Living in or near the monument are Maori wrasse, parrotfishes, blacktip, whitetip, and grey reef sharks, humpback whales, pilot whales, and multiple species of dolphin and porpoises. The wonders are endless! Here are five fast facts about Rose Atoll that you probably didn’t know (but absolutely should!):

1. Giant Clams are common in Rose Atoll. In fact, the monument is home to the largest community of these giant bivalves in the world! Like corals, giant clams host symbiotic algae that turn sunlight into food and provide the clams with an important source of food. The clams are important to the surrounding ecosystem and play a number of important roles, including production of food for other animals, water filtration, and strengthening reefs. Learn more about giant clams here. 2. It’s pink! One of Rose Atoll’s most stunning feature is the pinkish color of its fringing reefs. The color comes from an important algae that grows on its reefs: the crustose coralline algae (CCA). While roughly 100 species of stony corals live on Rose Atoll, the shallow reefs are dominated by the CCA, making them distinct from those found near other Samoan islands. The algae grow as a crust over and between gaps in the coral reefs and act as a cement that holds reef communities together. They depend on grazing fish like parrotfish to clear them of fast-growing fleshy seaweeds, which threaten to smother both the CCA and the coral.

3. It was born in 2009. Rose Atoll was officially established via presidential proclamation on January 6, 2009 by President George W. Bush under the authority of the Antiquities Act of 1906. The monument incorporates approximately 13,541 square miles within its boundaries, extending 50 nautical miles from the mean low water line of Rose Atoll. In 2012, when Fagatele Bay National Marine Sanctuary expanded, Rose Atoll became part of the new National Marine Sanctuary of American Samoa. Today, the sanctuary and monument protect a combined 13,581 square miles of incredible ocean habitat. 4. Rose Atoll is home to some of the most important seabird colonies in the region. Approximately 97 percent of American Samoa’s seabird population lives on the two islands closest to the reef. The Atoll supports seabird species including terns, shearwaters, boobies, frigatebirds, and tropicbirds, as well as one species of forest bird – the long-tailed cuckoo. 5. It’s small but mighty! Despite the diversity of life it supports, Rose Atoll is one of the smallest atolls in the world and includes two low sandy islets: Rose and Sand. These two islands are important nesting sites for the threatened green turtle and endangered hawksbill turtles, which were hunted for hundreds of years and to near-extinction because of the use of their beautiful shells for jewelry. In addition to serving as a safe place to lay eggs, the atoll is also an important source of food for turtles that feed on sponges and other reef-species.

Now, you’re an expert on all things Rose Atoll! If you’re itching to learn more about the wonders of Rose Atoll and National Marine Sanctuary of American Samoa, click here. 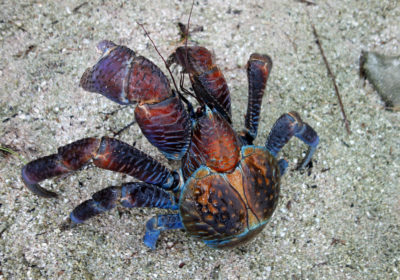