Sea Anemone and Clownfish: Behind the Scenes of an Iconic Friendship

Sea Anemone and Clownfish: Behind the Scenes of an Iconic Friendship 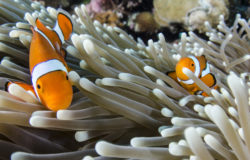 From manta rays and remoras to whales and barnacles, we know marine animals can form some pretty surprising alliances or symbiotic relationships. Another one of those relationships is that of the sea anemone and clownfish. In fact, this partnership is so iconic, it appears in a hugely popular animated movie about clownfish! Ever heard of it? Let’s learn more about each animal and how they work together to survive.

Sea anemones, which you might assume to be plants, are marine predatory animals related to jellies and corals. They usually fixate themselves to a hard surface where they remain for the rest of their lives, and they use their colorful, stinging tentacles to stun and catch unsuspecting prey that passes by. Many fish know not to go near anemones because of the risk of being stung and eaten.

Clownfish are vibrantly colored reef fish that live throughout the Pacific Ocean near Australia, Southeast Asia, Southern Japan, and in the National Marine Sanctuary of American Samoa. These fish are one of the few species that can survive the sting of an anemone – all thanks to a protective layer of mucus that covers their bodies and provides them with immunity from the anemone’s toxin. This adaptation not only allows them to get near anemones without hesitation, but they often make their homes within the anemone’s tentacles for protection and food.

The partnership between anemones and clownfish is known as mutualism because it provides benefits to both animals. Clownfish receive a safe place to live and even prey to eat, and in return clownfish provide food to the anemone, help rid it of harmful parasites, and chase away fish like butterflyfish that feed on anemones. Since clownfish receive such great protection from anemones, they rarely stray far from them, and will even lay their eggs in close proximity to their humble anemone abodes. If a tasty morsel passes by, the clownfish may dart out of the anemone and return once they’ve made their catch. At night, clownfish say safely within the swaying arms of the anemone.

While we’ve long known about the partnerships between sea anemones and clownfish, there is still so much to discover and learn about this pair. In 2008, for example, scientists from Auburn University identified a new benefit from these relationships, and it has to do with poop of all things! Their study showed that ammonia-rich clownfish waste fertilizes the anemone and helps them breathe, grow, and reproduce. This is important as anemones have no control of the flow or nutrient composition of the water that passes them by, and their passive feeding strategy means their diets can be imbalanced; clownfish can help solve these challenges and keep their host anemone healthy.