Whales and Barnacles: An Unlikely Duo

Whales and Barnacles: An Unlikely Duo

Symbiotic relationships – cooperation between two species to the benefit of one or both of them – are a useful survival strategy for plants and animals all over the world, and we find them in some pretty unexpected places. For example, if you look closely at the lumps and bumps on the skin of large, slow-moving whales, you might see colonies of one of its most common hitchhikers: barnacles! Barnacles, like many other species of marine invertebrates, begin their lives as microscopic larvae that are at the mercy of ocean currents. Since filter-feeding whales rely on plankton and fish near the ocean’s surface, barnacle larvae are bound to cross paths with these gentle giants eventually. Scientists aren’t exactly sure how barnacle larvae attach to whales, but some guess that barnacles in some locations have evolved to breed during whales’ breeding seasons when the whales migrate to warm, shallow waters and move slower and travel within a smaller range. When a whale swims near an area of barnacle spawning, the drifting larvae likely embed themselves in the whale’s skin and stay attached as they grow. As barnacles mature, they build their shells around their soft bodies and form tube-shaped cavities within it that anchor them to the whale, which replaces the top layer of its skin several times a day.

Interestingly, barnacles seem to be picky about where on a whale’s body they will live. They seem to choose spots like the head and chin where water flow is consistent, which is probably due to their filter feeding strategy. As the whales migrate throughout the year, the barnacles get a free ride to plankton-rich waters and can have a feeding frenzy.

The incredible size of the world’s great whale species allows them to support huge colonies of barnacles that weigh up to 1,000 pounds! While impressive to us, that kind of weight isn’t much to a whale that weighs multiple tons itself. A fascinating pattern we see with whale/barnacle relationships is that specific species of barnacles generally live of specific species of whales, a likely result of geographic location of each. For example, the barnacle Coronula diaderma has only been recorded living on humpback whales and Cryptolepas rhachianecti live only on gray whales! 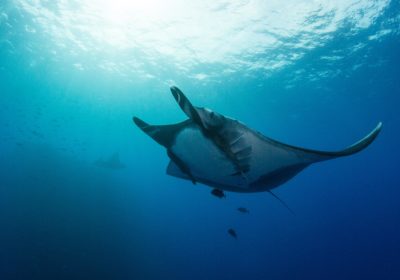 A Tale of Best Buds: Manta Rays and Remoras