When you hear “ocean conservation”, the image that comes to mind is most likely one of sea otters floating around the waters of Monterey Bay, majestic humpback whales leaping out of the water, or sea turtles gliding peacefully beneath the surface. These animals and the research that surrounds them are incredibly important to ocean health, but people often forget about the less cute and cuddly animals that call our ocean home. Invertebrates, animals without true backbones, may look scary but without them, the ocean’s ecosystems would crumble. These bizarre creatures lurk in the ocean’s dark corners, serve as the foundation of many food webs, and even clean the ocean by breaking down organic matter or filtering water.  Ready to meet a few? This herbivore can be found within Monterey Bay National Marine Sanctuary. Its contains algae and eelgrass, and when they feel threatened they realize a dark purple fluid, similar to squid ink. The reason it’s purple? because of the red algae, they consume. These spiked creatures, while they look like something only a sea witch would even dare to touch, play an important role in marine food webs. Fish eat algae off their spines, they provide a nutrient-rich food source for sea otters, and they protect smaller fish from prey. These aren’t your average lobsters! In fact, these crustaceans are more closely related to hermit crabs. This microscopic juvenile lives on the seafloor of National Marine Sanctuary of American Samoa, feeding on plankton within the water columns of their ecosystems.

This silly looking animal may look more like a stuffed toy than something that lurks at the bottom of the ocean, but it’s actually a deep-sea predator. Pictured near Channel Islands National Marine Sanctuary, scientists think this squid’s large eyes help it to see in the low light of its deep ocean environment. No clue what this is? Don’t worry. You’re not alone. This is one kind of sea slug. Its bright colors are for camouflage and these bright little gastropods can be found at the bottom of oceans all around the world. This one was found in Gray’s Reef National Marine Sanctuary off the coast of Georgia, where it is prey to turtles, crabs, sea spiders, and sea stars. The sea nettle jelly can be found swimming near Flower Garden Banks National Marine Sanctuary. They maneuver through the water by sensing and swimming toward light. This ghostly white invertebrate, while it may look harmless, can paralyze prey with its tentacles, causing the smaller creature to become stuck (and edible!). This spidery crustacean looks more like an insect than a sea creature! It inhabits the coral and rocky reefs in the Atlantic and is pictured perched on an urchin in Gray’s Reef National Marine Sanctuary. Its legs are typically three times the length of its body and it uses them to move quickly when in pursuit of its prey.

Creepy? Maybe a little. But each and every one of these creatures is a vital part of a healthy ocean ecosystem. The best part is that there are many more creatures in our seas just like these. We may think they look strange and live in spooky, dark places, but the more we can understand these creepy crawlers, the more we can learn about the health and wonders of our ocean. 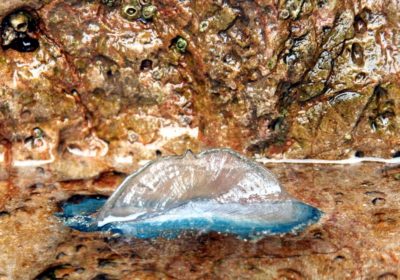 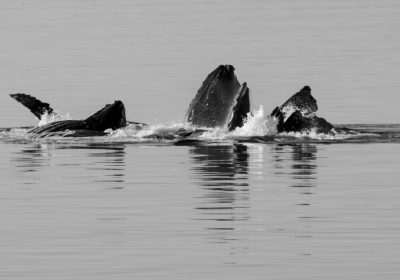