In the fall of 1854, the John J. Audubon and the Defiance met each other head on and landed in their final resting place along the shores of Alpena, Michigan in what is now Thunder Bay National Marine Sanctuary.  The Audubon and Defiance mark a time when demand was high for faster vessels for navigating the Great Lakes. Unfortunately, the need for speed in such a treacherous stretch of water within the Great Lakes led to an increase in vessel collisions, including the crash that marked the end of both the J.J. Audubon and Defiance’s journeys on October 21st.

J.J. Audubon is a 170-foot long, wooden two-mast schooner built in Ohio in 1854 by by Jones, Black River, Ohio. The ship’s primary purpose was to haul rail iron across the Great Lakes. Defiance is a schooner that was built in 1848 with “apple cheeked” bows that are hallmarks of Great Lake schooners at the time. Defiance was relatively small for her era measuring only 115 long and primarily transported wheat and corn.

On October 20, 1854, Defiance sailed through Lake Huron on a foggy night. At the same time, J.J. Audubon was traveling north to Chicago with 401 bars of iron on board. On the morning of October 21, shortly after 1:00 a.m., the two ships collided off Presque Isle, Michigan, in part due to the north and southbound sailing routes that brought ships dangerously close to one another. The crash put an end to both ships’ journeys, but both crews were able to deploy lifeboats and make an escape despite the speed at which the two ships crashed. Luckily, all of the crew members survived. Both vessels sank to the bottom within minutes, ultimately settling only a few miles away from each other at the bottom of Lake Huron.

This accident may have ended both ships’ seafaring adventures, but even more than 160 years later they remain well preserved and make for excellent ship-diving adventures. In fact, Thunder Bay National Marine Sanctuary is home 116 shipwrecks that are well preserved by the cold freshwater that freezes many of the wrecks in time. Defiance lies at a depth of 185 feet deep with its two masts and other features well intact and visible. Audubon is a few miles away near the Rockport Launch and is less well preserved but still an enjoyable dive; its foremast has fallen, and its main mast is laid across the deck.

If you can’t venture out to Thunder Bay to commemorate these two historically important wreck sites, you can take virtual tours of both ships. Check out a 3D model of the Defiance here. And check out a dive of the J.J. Audubon below. 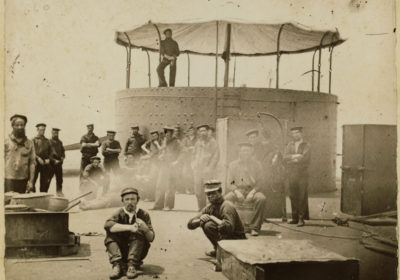