Hammerhead sharks have a distinctive profile and are one of the easiest sharks to identify.

Scalloped hammerhead sharks (Sphyrna Iewini) have a thick, wide head shaped like a double-headed hammer with its eyes and gills on the end. Different from other hammerheads, they have an indentation in a central location on the front part of their arched head. Two more indentations flank the main one, giving them a scalloped appearance. They are large sharks, but smaller than Great Hammerheads.

They sport sensing organs, called ampullae of Lorenzini, which help them find prey such as stingrays buried in sand and ocean floors.

Male scalloped hammerhead sharks can grow to nearly 6 feet in length and weigh up to 64 pounds. Females are larger, growing to more than 8 feet and weighing 80 pounds. The largest have been known to grow to 14 feet in length.

During the day, they stick close to shore and hunt offshore in the night. Despite their large heads, they have relatively small mouths. They feed on mackerel, herring, sardines, other fish, and cephalopods. They will also consume smaller sharks. A popular prey for the scalloped hammerhead shark is stingrays, despite the threat of barbs.

In the Atlantic Ocean, they have been found from New Jersey and southward all the way to Brazil. This includes the Caribbean Sea and the Gulf of Mexico. From January through March, large schools are sighted in the Gulf of Mexico, including in Flower Garden Banks National Marine Sanctuary. On the West coast, you will find them from Southern California to Ecuador and even Peru in the eastern Pacific Ocean. 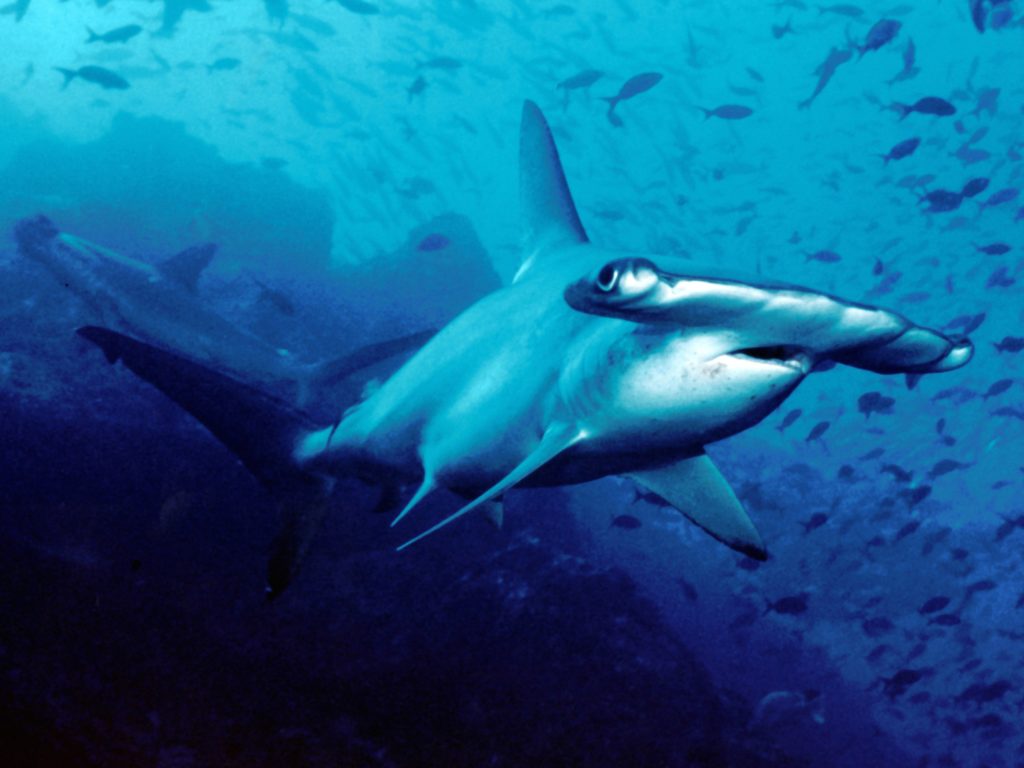 In the petition to get the species protected under the Endangered Species Act, three specific threats were cited:

Regulations have helped protect the population, but the sharks are still at risk from commercial fisheries who prize their oil, meat, and skin. They are also caught by sports fisherman and accidentally snared by fishing crews that are longline fishing, typically for tuna or swordfish. They often swim in schools. At times, the numbers in these schools can measure several hundred, which makes them easy prey for fishermen.

In parts of the Atlantic, their populations have declined by over 95% over the past three decades. Hammerheads are among the most common sharks caught for finning, a practice where the fins of sharks are cut off and the rest of the animal is discarded in the water. Shark fins are heralded as a delicacy, such as a shark fin soup, in some parts of the world. This practice is banned in the United States and has diminished in other cultures, which have turned more towards sustainable seafood. It is still considered a traditional dish in some places.

To further protect the population, President Obama signed the Shark Conservation Act in 2011, which closed some of the loopholes that were being used to skirt the laws to obtain fins. California’s Governor Jerry Brown signed legislation that banned the possession and sale of shark fins.

We celebrate shark species every week, not just shark week!

Learn more about the Marine Mammal Protection Act and how it protects marine species.