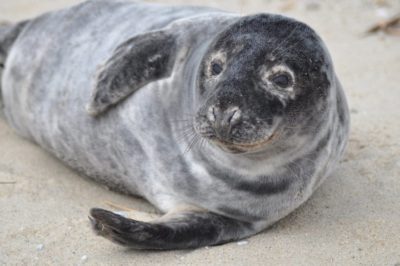 Gray seals (Halichoerus grypus, latin for “hooked-nose sea pig) are part of the family Phocidae or “true seal”. This means they don’t have external ear flaps and have short front flippers that are great for swimming but limit their mobility on land. This species of seal is found in coastal waters in the northern Atlantic Ocean and Baltic Sea, including Stellwagen Bank National Marine Sanctuary. When they aren’t swimming, they generally inhabit rocky coasts and islands, ice shelves and icebergs, and sandbars.

Gray seals are born with white fur that changes as they get older depending on their gender. Female gray seals will have a silver or gray coat with dark spots, while males tend to have darker coats with silver spots. Males also have a long arched nose.

Gray seals can weigh between 550 and 880 pounds and are between 7.5 to 10 feet long, with males being larger than females. They are opportunistic feeders that generally consume fish, crustaceans, and cephalopods (squid and octopus), and can dive 30-70 meters and hold their breath over an hour while foraging. Gray seals don’t feed daily, but they can eat upwards of 11 pounds of food in a single day.

Like most seals, gray seals spend much of their lives alone, gathering in social groups on shore seasonally for mating and pupping. Mating groups are often large and males can potentially mate with up to 10 females per season. Gestation for pups is nearly a full year, which includes a three-month delay in implantation of the fertilized egg.

In the northwestern Atlantic Ocean, off the coast of the United States and Canada, pups are usually born between January and February. Pups usually weigh around 35 pounds at birth and nurse from their mothers who provide fat-rich milk to help them gain about 3 pounds per day in their first three weeks of life. After about a month, pups will separate from their mothers to live independently.

You can help gray seals continue to thrive no matter where you live by making small changes in your everyday life! These might include refusing single-use plastic water bottles or straws, recycling, properly disposing of fishing line, choosing to shop with reusable bags, or picking up trash you find on the ground!