Off the coast of Washington state, adjacent to Olympic National Park and its old growth and temperate rainforests, is Olympic Coast National Marine Sanctuary. The sanctuary protects 3,188 square miles of ocean, its boundaries extending up to 50 miles from the jagged, rocky coast of the Olympic Peninsula. The cool, nutrient rich waters of the Pacific Ocean fed by a strong upwelling current support an incredibly rich and diverse ecosystem throughout the sanctuary, including an impressive variety of marine mammal species that feed on the fish.

At least 29 species of marine mammals call the sanctuary’s waters home for at least part of the year. Full-time residents of Olympic Coast National Marine Sanctuary include sea otters while part-time residents include migratory whales that visit in the summer to feed before heading back down the Pacific coastline for breeding season in Mexico’s warmer waters. Three main groups of marine mammals are found in these waters: cetaceans (whales and dolphins), pinnipeds (seals and sea lions), and mustelids (sea otters). Visitors to the sanctuary and nearby areas are often able to see these incredible animals all year long from land or on a local wildlife viewing tour, with activity and animal abundance the greatest in the summer months when food is the most plentiful.

Here are some of the iconic marine mammal species that add to the natural beauty of Olympic Coast National Marine Sanctuary:

Cetaceans: toothed or baleen whales, including whales, dolphins, and porpoises, that are fully-aquatic and breathe through blowholes atop their heads. They have streamlined body shapes, are often large, and are strict carnivores.

Gray Whales – These whales make the longest migration of any mammal on earth. They are present in the sanctuary starting in April and stay until the late summer, when they leave for Mexico. Their migration is about 10,000 miles each way and takes two to three months to complete. Their diet includes invertebrates that live in the sediment, which they scoop up into their large mouths, pushing water and sand particles out through their baleen plates made of keratin like our hair and nails. Gray whales were once hunted to near-extinction due to commercial whaling, but their populations have recovered thanks to protections from the Endangered Species Act. They are also the first species of marine mammal to be removed from the Endangered Species list. Threats to the species today include entanglement, vessel strikes, killer whale attacks, and human disturbances.

Orcas – The largest member of the dolphin family, orcas are also one of the most well-known species of cetacean in the world. They live in all areas of the world’s ocean and are present in the sanctuary all year long. There are several populations and two types of orcas that live along the coast of Washington state: transients, which eat marine mammals, and residents, which eat fish, squid, and other smaller animals. Orcas, also known as killer whales, are incredibly smart and work together to corner and catch their food, similar to the way wolves work together to catch their food. These whales are quite active and athletic due to their muscular bodies and powerful tails, allowing them to launch their bodies out of the water, slap their tails on the water to make loud sounds or stun prey, and peek their heads out of the water to investigate the ocean’s surface. These animals have no known natural predators, but are at risk of entanglements, vessel strikes, decreasing prey availability, and human interactions.

Harbor Porpoise – Porpoises differ from dolphins in that they are much smaller, have spade-shaped teeth, are more solitary in nature, and have fused vertebrae. The harbor porpoise is one of only seven species of porpoise in the entire ocean. They are quite timid and elusive, generally gathering in pairs or groups of three and avoiding boats. They rarely leap out of the water or draw attention to themselves with fin slaps or splashes. They live in the waters of the Pacific Northwest all year long and are often spotted along the Whale Trail in Puget Sound, the Strait of Georgia, and the Strait of Juan de Fuca. If you’re looking for them in the sanctuary, you might catch a glimpse of their small dorsal fins or spouts of water as they forcefully exhale and take a quick breath in before disappearing beneath the water’s surface. They can remain underwater for nearly five minutes and five as deep as 500 feet below the surface. Their population is declining, though they are listed as a species of Least Concern by the IUCN Red List. They are particularly vulnerable to entanglement in fishing gear, pollution, and human disturbances.

Risso’s Dolphin – One of the larger species of dolphins in the world, the Risso’s dolphins are known for the distinct scarring patterns on their skin, which develop as a result of frequent teeth raking, a social behavior where dolphins drag their teeth on another’s skin to establish social dominance or compete for resources. They migrate seasonally and follow the populations of squid on which they feed and are found in tropical and temperate waters worldwide. There are between 12,000 and 16,000 Risso’s dolphins that live along the California and Pacific Northwest coasts. They generally hunt at night due to the nocturnal behavior of squid and can dive as long as 30 minutes at a time between breaths. They are highly social animals that travel in pods of 10 to nearly 40 individuals. Occasionally, many pods gather in the same area and create megapods of 1,000 or more individuals that feed and mate before going their separate ways. Risso’s dolphin populations in Olympic Coast National Marine Sanctuary are stable but face threats like bycatch, plastic pollution, and climate change effects.

Sea lions, like this one in Olympic Coast National Marine Sanctuary, are graceful and acrobatic swimmers. They use this speed and maneuverability to catch an assortment of small fish and squid. Photo: David J. Ruck/NOAA

Pinnipeds: semi-aquatic carnivores that adapt to life in ocean waters and rocky shores. They are fin-footed animals that include earless and eared seals.

Harbor seals – Harbor seals are one of the most common seal species worldwide. On America’s Pacific coast, we see them from Alaska all the way down to Mexico’s Baja California coast. Within the sanctuary, we see harbor seals all year where they stay close to shore and feed in intertidal areas like lagoons, estuaries, and the open ocean. They are opportunistic feeders that eat whatever is easiest to catch, most commonly fish and squid. When they aren’t resting on shore, most of their active time is spent diving and foraging. These animals are generally solitary except for mother and pup pairs, which form strong bonds from birth until the pup is weaned about six weeks later. Harbor seal populations are generally considered stable and of least concern, though they were historically hunted for their pelts. While this is no longer a legal or common practice, they still face threats like reduced prey availability due to overfishing, climate change effects, and noise.

Steller Sea Lions – Steller sea lions are the largest sea lion in the world and on the Pacific coast. Males can weigh more than 2,400 pounds when fully grown. They arrive in Olympic Coast during the late summer and early fall months, often gathering on and near the islands of Cape Flattery and Cape Alava. They play an important role in the local ecosystem by feeding on fish that are sick, injured, allowing healthier fish to thrive. These massive sea lions are also quite athletic, able to dive to depths of 1,400 feet or more. Historically, they were quite abundant, but populations declined to endangered levels by the 1990s due to fisheries interactions but have since recovered due to protections afforded by the Endangered Species Act. They gather in colonies and have a polygynous breeding structure in which a small number of mature males father pups with multiple females, and males lower in the social order do not have the opportunity to mate at all that season. Threats to this species include food depletion, fisheries interactions, entanglement, and ship strikes. They are listed as Near Threatened on the IUCN Red List.

Northern Elephant Seal – Northern Elephant Seals are the largest species of true seals, also known as earless seals. Adult males are known for their large, hanging, inflatable snout or proboscis, which resembles an elephant’s trunk. Their strong vocal clap threats can be heard for miles as males violently compete for territory and females during the breeding season. For most of the year, elephant seals are alone at sea, traveling to shore for breeding in the winter or molting in the spring and summer. The best time to see Northern Elephant Seals in Olympic Coast National Marine Sanctuary is between September and November when they are feeding between their molting and breeding seasons. It is rare to see these animals on shore in Washington State, but they are commonly seen offshore when they surface between dives. Mustelids: a family of carnivores that includes minks, weasels, ferrets, wolverines, and otters. Only two of the nearly 70 species of mustelids live in the ocean: sea otters and marine otters.

Sea Otters – These cute critters spend nearly their entire lives at sea. They are especially fond of kelp beds, which they can use to anchor themselves and prevent drifting. They have short, paddle-like tails and webbed feet that make them well-adapted for life in the water. Within Olympic Coast waters, sea otters are found in the Alaskan or Northern Seas. Sea otters do not have blubber like other marine mammals, and have a very high caloric-requirement to maintain their body temperatures. Their dark fur is the densest of any mammal, which creates a water-tight layer around their skin and also helps them thermoregulate in the cooler waters in which they live. They primarily feed on invertebrates that live in or near kelp forests, including crabs, clams, mussels, sea urchins, and sea cucumbers. They sometimes use rocks to smash open the hard shells of some of their prey, and they can store food in a pouch of skin under their forelegs. Sea otters were hunted to near extinction on the Washington coast by the early 1900s due to conflicts with fishermen and the density of their fur coats. Their recovery began in 1969 when they were reintroduced from Alaska. Sea otters are a keystone species whose feeding behavior changes the community structure of their local food webs and keeps species like sea urchins in balance. They remain threatened by habitat loss, pollution, and competition for food from overfishing. They are especially vulnerable to oil spills, which weigh down their fur and expose their skin to the cold water of their environment.

Olympic Coast National Marine Sanctuary falls under the jurisdiction of the Pacific Northwest Marine Mammal Stranding Network. If you are in the area, read up on the Network to learn about what to do if you believe you have seen a marine mammal that is sick, injured, or entangled in debris. Sometimes, we mistake a resting seal for an animal in distress, and it is best to call on these trained experts instead of trying to evaluate the animal ourselves.

To learn about all of the marine mammal species that call the Olympic Coast home, visit their website. 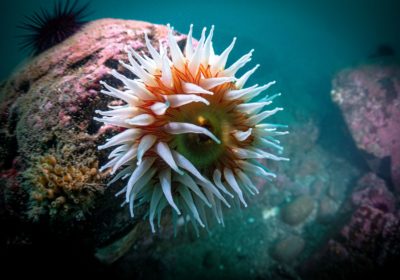 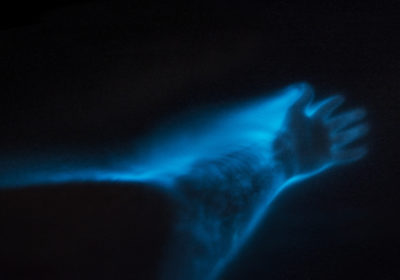