Aptly named for its favorite habitat, kelp crabs (Pugettia producta and Pugettia gracilis) are part of a group known as spider crabs. They are omnivorous and play an important role in maintaining the health of kelp and creating balance in their ecosystems.

Kelp crabs have long legs with a small, smooth body that is pointed at its front. The legs end in sharp points, which help the crabs cling to and climb surfaces like rocks and pilings. They range in color from yellowish-green to red, with the most common coloration being dark brown with a red or yellow underside. Coloration in this species is directly influenced by the food an individual eats. Red algae leads to more brown and red hues and green algae leads to more yellow and green hues. Males are larger than females, and their bodies can reach almost four inches in diameter.

Kelp crabs are found in waters along the West Coast of North America, ranging from Alaska to northern Mexico. In the National Marine Sanctuary System they can be found in Monterey Bay National Marine Sanctuary and Olympic Coast National Marine Sanctuary. They are often found in intertidal waters and can live as deep as 75 meters down. They are often found in kelp beds or attached to pilings as they have an affinity for darker places that offer a number of hiding spots. Most of the time, kelp crabs are herbivorous and feed on algae and kelp. Since algae is less abundant in the winter months and a crab’s gotta eat, these scavengers will alter their diet to feast on small animals like mussels, barnacles, and marine worms until algae grows back.

The kelp crab undergoes a series of molts throughout its life cycle, the last of which occurs when an individual reaches its maximum size. This is also when a kelp crab achieves sexual maturity. Kelp crabs generally lead solitary lives but gather in areas near other kelp crabs. In June and July, males and females reproduce, which is made obvious by the red-orange egg sacs that attach to the abdomens of adult females. These eggs remain attached to the female for about a month after fertilization, after which time they hatch into larvae. Each female can carry up to 84,000 eggs per season, though many of the larvae are eaten by other animals well before they reach their juvenile life stage.

Sea otters are a kelp crab’s most common predator. Human activity also negatively affects kelp crab populations, especially activity that harms habitats, affects water quality, or leads to warmer or more acidic waters. Kelp crabs are not a species people generally eat, so they are not targeted by recreational or commercial fishers.

There are no special conservation efforts or legal protections in place to conserve the kelp crab, but future efforts would include ensuring that there are plenty of kelp beds for the crabs to live and hide in.  If exploring the tide pools on the west coast, you can personally aid in conserving kelp crabs by replacing any surf grass that you pull back, especially if a kelp crab is spotted. 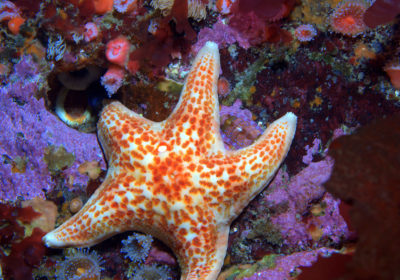