On the second floor balcony of the Aquarium of the Pacific in Long Beach, there’s a blank white wall twenty-five feet long. It’s about to be filled with larger-than-life images of marine snails to tell the story I’ve been documenting for over a year – in which tiny abalone are bred in labs to fulfill their destiny in the wild ocean.

The snail in question is the white abalone, the first marine invertebrate to make the endangered species list in the United States and a NOAA Fisheries ‘Species in the Spotlight’. I’ve been working on a book project about all seven species of California’s abalone, but given their perilous state, the endangered white (and black) abalone garner much of the press. With the support of the National Marine Sanctuary Foundation, I’ve driven the California coast to document every step of this snail odyssey, amassing thousands of photographs of the seven abalone species, their habitats, and the people who work to support their recoveries. Just a few of the thousands of abalone images I had taken over the course of this project, laid out on my floor as part of the image selection process for the exhibit. Photo credit: Oriana Poindexter

The Aquarium of the Pacific (AOP) is a member of the White Abalone Restoration Consortium (WARC), a group of organizations working together to restore white abalone. The Aquarium utilizes their public-facing position with a white abalone exhibit, where visitors can see and learn about this endangered snail, as well as acting as a ‘foster care’ facility for baby white abalone that are destined for the ocean. Creating an exhibit to visualize the journey the abalone in the Aquarium’s care make during their young lives is an exciting opportunity, but also a challenging exercise in editing and curation.

Twenty-five feet of space initially sounds like plenty. Once sketched out, I realized that from the thousands of abalone images I had taken over the course of this evolving project, I could select a maximum of fourteen for the exhibit. This felt like an impossible task to accomplish digitally, given the state of my file organization, so I printed nearly 150 candidate images at my local CVS, came home, and laid them all out on the floor.

It’s a forgotten experience to flip through a stack of small prints. While I do still use film, the vast majority of this project was captured digitally, but the satisfaction of seeing images in print is the same. You relive the experience of each image, remembering the elation, the challenge, or the beauty of that moment. Laid out on my living room floor, the mosaic of abalone images was like seeing the experiences of the past year and a half all in one eyeful.

I’ve been joking that I spent the pandemic becoming an abalone – holding tight to my substrate, hunkering beneath a beautiful shell, and reaching out only to grab food. I started working with the National Marine Sanctuary Foundation on this abalone book project, The Iridescent Ones, on March 1, 2020, blissfully ignorant of what was to come. But laid out in front of me was a vibrant journey, up and down the coast, above and below the sparkling surface of the Pacific. I photographed my first endangered white abalone in June 2020, in a San Diego parking lot to accommodate social distancing protocols. The next month, I saw my first wild one, sixty feet deep in the kelp forest with the Paua Marine Research Group. In April 2021, I traveled to Bodega Bay to document a spawning event, where I saw the next generation of white abalone enter the world, the eggs bursting out of the female abalone’s shell pores. Later that day, I followed the newly fertilized eggs to the airport, where they boarded a private jet to Southern California.

In early October, I visited some of those jet-setting babies in the growing tanks behind the scenes at the Aquarium of the Pacific. Just a few weeks later, I dove in San Diego and Los Angeles to document the release of the previous generation of white abalone, bringing the total of released animals to just over 7,000.

And this was just the white abalone’s story! Red abalone took me freediving in Point Arena and snooping beneath a pier in Monterey, black abalone took me to Central California on a top secret rescue mission, and green abalone took me back to the beaches of my childhood with a fresh perspective.

The threads between these disparate places are the surprisingly charismatic snails and the many people who are working hard to lend these abalone a helping hand. But back to the images spread out on my floor – I needed to identify a concise thread of narrative to communicate this far-flung adventure tale that is abalone restoration in California. A young white abalone perched on the finger of a scientific aide for the California Department of Fish & Wildlife, en route to be released into the wild. Photo credit: Oriana Poindexter.

This portrait of a young white abalone was taken on a moving boat just last month, as we were motoring out to the release site. I may be projecting, but the apprehension in the eyestalks of this little snail is well founded. They are about to enter the Pacific Ocean for the first time to help restore their species, making them the perfect character to carry this visual narrative.

Finding my star helped the rest of the narrative come together. This intrepid little explorer was literally born to fulfill its destiny of restoring the species in the wild. We start by giving viewers a good look at what exactly an abalone is and where they live, followed by the reasons they need our help today. Viewers then learn about the captive breeding and outplanting process, from the lab where the abalone are born, down to the ocean floor where they are released for their new lives.

It is easy to wax poetic about this as an underdog story, in which one-inch long baby snails are pitted against the giant, wild ocean and the looming threats associated with climate change. In order to meet the Aquarium’s guidance on caption length (very short), I had to scale back the volume of information I was trying to impart. With the help of the Aquarium’s experienced education and exhibit staff, we trimmed all the fat to create lean, readable, and accurate messaging with ten caption panels. Writing shorter is always tougher than writing longer – as evidenced by this blog post.

As I write this, the captions are being translated into Spanish, the prints are in fabrication, and due to be installed very soon. The exhibit will open with a lecture and cocktail hour on Wednesday, December 1, 2021, which is open to the public with pre-registration at this link. I’ll be giving a presentation, along with Dr. Melissa Neuman, the White Abalone Recovery Coordinator for NOAA Fisheries.

Join us for the opening event, or visit the Aquarium during the holiday season with your family to view the exhibit! 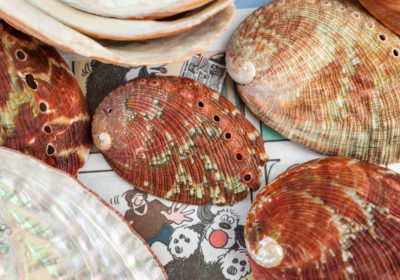 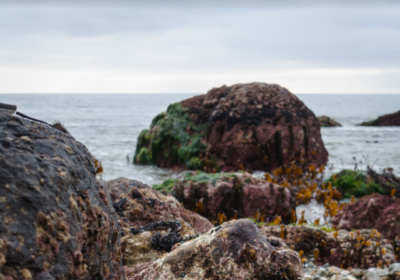