A before/after comparison of the shoreline. Photo credit: Wendy Bragg

After fires swept along California’s Big Sur coast in 2020, heavy rains inundated the scorched land in early 2021, leading to debris flows — water-laden masses of sediment that pick up rocks, boulders, and charred debris, rush down steep slopes and follow river channels toward the sea, leaving thick, muddy deposits in their wake. In addition to causing the closure of Highway 1, in many places on the Big Sur coast, this cement-like mix of mud and debris was deposited on habitat that was home to the endangered black abalone (Haliotis cracherodii). Thanks in part to funding from the National Marine Sanctuary Foundation, our team of University of California, Santa Cruz (UCSC) researchers and Multi-Agency Rocky Intertidal Network (MARINe) professionals have been studying how the 2020 California fires have impacted areas outside the fire scar, as far away as the coast. Our team, having anticipated this possibility, had begun preliminary surveys of at-risk areas beginning in October 2020, so when the debris flows hit the coast, we were ready to respond.

Black abalone are typically found in crevices and under boulders in rocky habitat located between high and low tide (rocky intertidal zone) and feed opportunistically on drift kelp and algae. The rocky intertidal can be thought of as a jar of marbles with openings where abalone make their homes. Like pouring sugar onto marbles, sediment from debris flows rapidly filled openings between boulders and in crevices, leaving no space for abalone nor time to escape. This sediment didn’t move quietly; these explosive events moved boulders the size of minivans and sheared off sections of bedrock, instantly transforming the coastline.

Once the rains stopped, our team worked quickly to gain access to closed sections of Highway 1 and moved into the area to assess the damage. Our team of UCSC, MARINe, and Monterey Bay National Marine Sanctuary personnel quickly shifted from reconnaissance to a rescue operation when we saw what remained of once healthy rocky habitat. Abalone were left partially or completely buried, scoured, with broken shells, and stranded on now-bare rock islands surrounded by sandy beach (like the tops of marbles sticking out of sugar). Far from the water that allows them to breathe and the kelp that feeds them, the abalone were also exposed and injured, making them highly susceptible to predation. Since February, our team has worked tirelessly to rescue over 200 black abalone while simultaneously monitoring the ongoing changes to the coastal habitat. The rescued abalone were rushed to a facility where trained technicians care for them and prepare for their release to the wild. Working cooperatively with NOAA’s National Marine Fisheries Service and California’s Department of Fish and Wildlife, we have now identified safe areas and are making final plans for releases in the coming weeks. We will monitor the released abalone for a minimum of one year and ideally 5+ years (dependent on much-needed funding), to inform the success of rescues and relocations.

Additionally, we are using data collected from these core accessible sites to calculate the broader losses along the Big Sur coast, much of which is inaccessible. Based on cursory examination of data, we estimate losses of thousands of abalone and impacts to wide swaths of habitat at our core sites, which constitute a fraction of the coastwide affected area. Region-wide losses could reach the high thousands to tens of thousands. Importantly, 75 percent of the remaining black abalone population is along the central California coast adjacent to the 2020 fires, so these losses could prove catastrophic to the successful recovery of the species.

As the team absorbs the full impacts of this event, experts are reevaluating what actions will best support recovery efforts. While the central California coast was once presumed a stronghold from which recovery of the species could expand, the newly documented losses and the ongoing dynamic movement of sediment demonstrate that the stability of this area cannot be assumed as source populations for expansion. Discussions now include possibilities of restoration efforts within and outside the Big Sur coast and the feasibility of beginning a culturing program. Each of these efforts come with their own challenges, financial commitments, required permits, and cooperation among agencies – and much work remains. 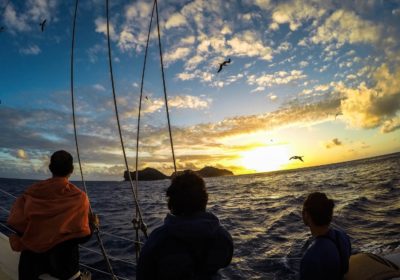