“Captain Santa” and the story of the Christmas Tree Ship

“Captain Santa” and the story of the Christmas Tree Ship Our national marine sanctuaries protect the rich cultural and maritime history of the United States by preserving historic shipwrecks and sharing the legends of the captains who sailed them. One of the most celebrated shipwrecks in the waters of the proposed Wisconsin-Lake Michigan National Marine Sanctuary is the three-masted schooner Rouse Simmons, known as the Christmas Tree Ship. It got its nickname for carrying evergreen trees to Chicago every Christmas season.

In November 1912, Captain Herman Schueneman, was planning to make the 300-mile sail from  Michigan’s Upper Peninsula to Chicago to deliver his annual load of Christmas trees. While en route to Chicago for its last voyage of the year, the ship encountered a storm and disappeared. All souls were lost, including a number of lumberjacks catching a ride back to Chicago for the holidays.

In 1910, after decades as a Christmas tree sailor, Herman Schuenemann purchased a share of Rouse Simmons. He earned the nickname “Captain Santa” for often donating trees to the poor and churches, decorating his ship with ornaments and allowing citizens onboard to purchase trees and decorations. On its final voyage, the ship was carrying an estimated 3,000-5,000 Christmas trees. Its unfortunate journey coincided with the start of a large storm that sunk many other ships, including the South Shore, Three Sisters, and Two Brothers. After the storm, the only evidence of what happened were the testimonies of local life-saving stations that saw the ship flying its flag at half-mast, a universal sign of distress. While attempts were made to rescue the ship and her crew, the Rouse Simmons disappeared in the storm.

Over the years, Rouse Simmons’ disappearance became an important part of the Great Lakes’ history, creating ghost legends and becoming children tales. The ship’s disappearance remained a mystery until 1971. Milwaukee scuba diver, Gordon Kent Bellrichard, was surveying the bottom of Lake Michigan searching for the Vernon, a 700-ton steamer sunk in October 1887, when he discovered the wreck with evergreens still aboard!

The loss of the Rouse Simmons symbolizes an important turning point  in maritime history. The ship launched in 1868 during the peak of sail-powered ships.  Sail-powered ships were popular for holding heavy loads and carrying lumber that fed growing urban areas such as Chicago and Milwaukee. By the time the ship went down, steam-powered technology had begun replacing sail-powered ships.

Every year, the U.S. Coast Guard Cutter Mackinaw commemorates the voyage by making the journey from northern Michigan to the Chicago Navy Pier to donate a symbolic load of Christmas trees to deserving families in the city; a kind gesture in the spirit of Captain Santa. Preserving our nation’s underwater maritime heritage for future generations is at the heart of the proposed Wisconsin–Lake Michigan National Marine Sanctuary.

The proposed sanctuary would protect 37 shipwrecks and related underwater cultural resources that possess exceptional historic, archaeological, and recreational value. From the 1800s to the early 20th century, wooden schooners and innovative steel steamships moved raw materials, agricultural products, and passengers over the icy cold waters of Lake Michigan and drove the prosperity and expansion of our nation. Wisconsin communities played critical roles in evolving the Great Lakes from a maritime frontier into the nation’s busiest waterway.  The Christmas Tree Ship is a symbol of the role the Great Lakes propelling the US economy.

Wisconsin’s maritime heritage runs deep with more individually listed shipwrecks on the National Register of Historic Places than any other state.  These shipwrecks and cultural artifacts represent the tenacity and entrepreneurial spirit of generations of Americans.

The proposed sanctuary would protect the history that remains intact underwater including the final resting place of many sailors and passengers. The continued protection and preservation of such shipwrecks continues to tell the stories of Great Lakes ships and crews in our nation’s past and even create new opportunities in research, heritage tourism, and education.

To learn more about the Christmas Tree Ship, visit:  https://www.archives.gov/publications/prologue/2006/winter/christmas-tree.html Why a national marine sanctuary would be great for Wisconsin communities 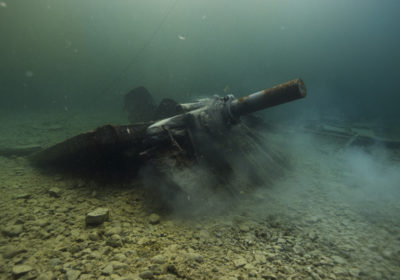