On April 4, 1911, the 315-foot Hannah M. Bell grounded about six miles offshore of Key Largo, Florida. The ship’s destination was Veracruz, Mexico, and it was loaded with coal to deliver. The ship was built in England in 1893 and frequently made transatlantic trips between Europe, the East and Gulf coasts of the United States, the Caribbean, and South America.

No lives were lost in the wreck, but by May strong weather and waves had torn the ship apart. For decades, Keys locals and visitors alike visited the final resting place of the Hannah M. Bell without knowing its name or story –it wasn’t until 2012 that NOAA’s Office of National Marine Sanctuary and the National Association of Black Scuba Divers confirmed the ship’s identity. So how did this hundred-year mystery get solved?

In the 1980s, Mike Butler, a dive boat operator based in Key Largo, popularized the dive site and it became known as Mike’s Wreck. The site was the final resting place of an unknown ship as well as fish, coral, and other critters. It wasn’t until 2009, when Matthew Lawrence –  maritime archaeologist for Stellwagen Bank National Marine Sanctuary in Massachusetts – visited the site for a dive that the search for the unknown shipwreck’s history began.

The unknown shipwreck was near those of the USS Arkansas and the City of Washington and sites near a site now called Elbow Reef. Shallow reefs – and the ships they have claimed over the years – have led to numerous groundings and wrecks over the years. In fact, there are an estimated 1,000 shipwrecks throughout the Florida Keys, according to Florida Keys National Marine Sanctuary.

For nearly three years, Lawrence, volunteers from the National Association of Black Scuba Divers, and Florida Keys National Marine Sanctuary researched newspaper archives, shipping records, and other historical documents, and comparing them to photographs of the wreck site to help determine the sunken ship’s past. On November 20, 2012, the Office of National Marine Sanctuaries announced that they confirmed the identity of the wreck – it was the Hannah M. Bell.

Identifying the shipwreck is an exciting way to engage communities in maritime heritage and provides another educational opportunity for tourism operators and sanctuary managers, reminding us all that there is so much wonder in the ocean left to discover!

To learn more about shipwrecks in the Florida Keys, click here. 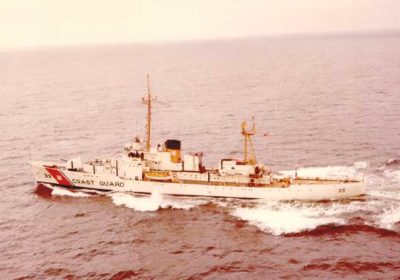