Our nation’s maritime heritage defines who we are. From shipwrecks to cultural artifacts, the underwater sites we preserve reflect our identity, history, and shared values. Yet our heritage also reflects our blind spots. The stories we tell and the places we treasure speak volumes not only about what we most hold dear but also about which stories matter.

During World War II (WWII), many military fighter planes were lost in training accidents over Michigan waters. Five aircraft were piloted by members of a remarkable and groundbreaking group: The Tuskegee Airmen. Despite decades of quotas, exclusionary practices, and racial discrimination, the Tuskegee Airmen not only became the first African-American military aviators in U.S. history but were also some of the most successful. They flew 1,578 missions and won over 850 medals as they shielded bombers from enemy attack in the skies over Europe. With key support provided by ground crew, cooks, and technicians, including women and members of other underrepresented groups, the program’s success paved the way for integration of the U.S. armed forces in the years to come.

On Wednesday, with the help of sponsor Boom Supersonic and partners at Diving With a Purpose, The Tuskegee Airmen National Museum, and The Detroit Historical Society, the National Marine Sanctuary Foundation celebrated the 80th Anniversary of the Tuskegee Airmen with a Blue Beacon panel discussion highlighting their profound legacy. Among the distinguished panelists, the Foundation had the unique honor and privilege of inviting contributions from two living Tuskegee Airmen—Lieutenant Colonel (LTC) Alexander Jefferson and LTC Harry Stewart—who experienced what it was like to serve in these remarkable units first hand: “Going to Tuskegee, where the airfield was over 90 percent black and the university was over 100 percent black. “It was a beautiful situation,” said LTC Stewart. “Soldiers could feel the comfort of friendship and camaraderie unlike what other black soldiers had in the rest of the South. I was very fortunate to get selected to be sent to Tuskegee. It was a godsend.”

But, as LTC Jefferson pointed out, there was still no escape from segregation. He described a particularly revealing visit from a two star general.

“The bottom line was this: ‘gentlemen, this is my airfield. As long as I’m in command, there will be no socialization between white and colored officers.’ With things like this going on in the background, it gives you an idea. We were still under segregation. Think about it. Ironically, black men, flying in defense of a white system against Germany, which is another white system, even more vicious. As a Tuskegee Airman, to come out of it with half your wits was a miracle.”

Thousands of members of the public had the unique opportunity to listen, comment on and ask LTC Jefferson and LTC Stewart questions about their experiences during the war. Audience members applauded them for their service, sacrifice, and bravery as well as affirming the value of preserving key cultural heritage resources such as the Tuskegee wrecks.

“Thank you for your service. Thank you to everyone on the panel for all you do to connect people to such an important part of our shared history. This is what diving and exploration is all about,” commented one viewer.

Dr. Smith highlighted archaeological efforts to document two recently re-discovered Tuskegee plane wrecks found in Michigan waters and keep the stories of the Tuskegee Airmen alive, saying,  “We have one of the aircrafts that LTC Jefferson and LTC Stewart flew as instructors [at Tuskegee Army Airfield] at the Museum. And, we have two of the aircrafts that served at Moton Field and their serial numbers trace all the way back to WWII so we continue to collect historic aircrafts… That’s how we’ll keep the Museum alive. It will be a Museum that is stationary and one that flies around the country to visit other cities.” Jay Haigler, who is leading a memorial dedication effort for the five Tuskegee Airmen who were lost in Michigan waters, added,  “The ultimate submerged heritage resource is material culture, or remnants of the Tuskegee Airmen planes. Their stories and this material is critically important to the nation. At Diving With a Purpose, we hope to be involved in this continuum by telling these stories and working with the National Marine Sanctuary System.”

All agreed on the importance of protecting valuable maritime heritage resources and ensuring these sites share the histories of us all. As Dr. Dunnavant said, “This is an opportunity to shine a light on the Tuskegee Airmen’s fight for equality, the efforts to honor their service, and the importance of ensuring our maritime heritage represents the diversity of American experiences.”

You can watch the full event on our Facebook Page.

This was the first virtual event in 2021 of the Foundation’s Blue Beacon Series, a set of panel discussions, lectures, roundtables and film screenings which bring to light the pressing issues facing our ocean and great lakes. This year’s Series events will focus on the role of people as stewards of our blue planet.

We hope you will join us in May for a celebration of Papahānaumokuākea Marine National Monument’s 15th Anniversary and the lessons we can learn from its successful co-management, 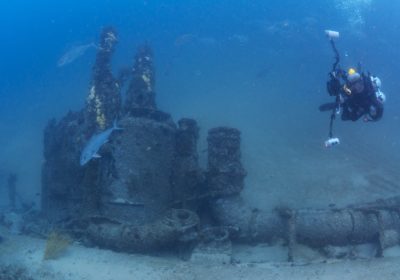 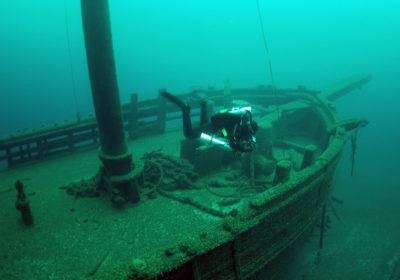