If you have ever been in the ocean, you know how salty it is, whether because your skin and hair feel dry when you get out or you’ve tasted a mouthful of ocean water after being knocked over by a wave. But how did the ocean get to be — and stay — so salty? The ocean’s high salinity comes from two main sources: runoff from the land and openings in the seafloor.

As far removed as rocks on land may seem from the ocean, they influence the ocean’s chemical composition, which includes its saltiness. Rocks contribute so much dissolved salts to the ocean as a result of regular rains. Because rainwater has a fairly low pH and is slightly acidic, it can erode rocks over time. The molecules and ions that come off of the rocks are carried away with the rainwater before ending up in nearby waterways, which ultimately lead to the ocean. Experts estimate that four billion tons of dissolved salts are carried to the ocean by rivers and other small waterways each year.

During Earth’s early years, the ocean was probably much less salty than it is now but became salter due to millions of years of rock erosion and runoff. In our modern era, the ocean is no longer getting saltier due to a balanced system of salt input and output through natural cycles. In fact, species of marine life have adapted to a saltier ocean and make use of dissolved ions in the water, which regularly removes some of it from the environment. Any dissolved ions that remain in sea water increase in  concentration over time and makes the water salty. But why aren’t rivers and streams as salty as the ocean if they carry so many minerals with them to the ocean? It’s because these bodies of water are smaller and are replenished often by new rain, which makes them less salty. In contrast, the ocean, as the basin that catches the outputs of the world’s rivers, streams, and other waterways, receives and keeps all of the salt and minerals deposited into it, and rainwater does very little to dilute this massive body of water.

Hydrothermal vents in the deep sea are also a major source of ocean salt. These cracks in the seafloor allow low-salinity ocean water to seep down between the earth’s crust, become superheated by magma, and undergo a series of chemical reactions, including mineralization. The result is mineral-rich hydrothermal fluids that flow back to the ocean through the vents. Underwater volcanic eruptions can also lead to massive pourings of minerals into the ocean.

Overall, the ocean has a salinity near 35 parts per million, meaning 3.5 percent of seawater’s weight comes from salt. The world’s ocean is not uniformly salty, though, which you might already know based on the appeal of the Dead Sea, located between Israel and Jordan and with a salinity level of nearly 32 percent, to tourists. Factors like temperature, evaporation rate, precipitation, and geographic location all influence the salinity level of our waters.  Generally the salinity of waters near the equator and the poles is much lower than that of waters found at mid-latitudes. Salinity level interestingly affects the water’s density, and in the case of the Dead Sea this makes us incredibly buoyant and able to float effortlessly at the surface.

Next time you experience the salty waters of the ocean, take a moment to remember the long journey it took to reach the ocean — and remember the importance of keeping our inland areas clean and free of chemical fertilizers, debris, and other materials. If salt can make such long journeys to the open ocean, so too can things that don’t belong there! 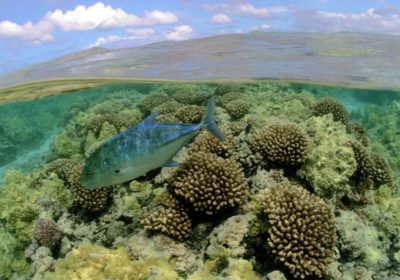