Diving and sightseeing are popular activities in and near this sanctuary, and we encourage you to explore its beauty if you ever get the chance. Here are five of our favorite sights to see in Flower Garden Banks: No, not financial institutions – these banks are underwater mountains that rise from the deep water and make this site special . The three banks within the sanctuary (East Flower Garden Bank, West Flower Garden Bank, and Stetson Bank) all support coral reefs, some of the healthiest in the Caribbean and Western Atlantic region. These reef communities began developing on the salt domes approximately 10 to 15,000 years ago and are now they are a support system for a complex, balanced ecosystem and supporting both shallow and deep-water species. Flower Garden Banks and areas near the sanctuary are one of only two places in the world where you can find the golden phase of the smooth trunkfish, the other being near the Bay Islands north of Honduras. The golden smooth trunkfish is not a distinct species but a different color variation of the smooth trunkfish that we see throughout the rest of the Caribbean and Gulf of Mexico, including Florida Keys National Marine Sanctuary. Scientists have not yet discovered the reason for the color differences in the Flower Garden Banks and Honduran populations. This is an incredible and rare find to keep an eye out for while diving the sanctuary. It’s such a treat if you find one! Every August, about a week after the full moon, a mass coral spawning event takes place in and near the sanctuary. For several days, multiple species of star and brain corals release gametes into the water. This event allows for genetic mixing between different species of corals and increases diversification. It’s an incredible sight to see and a rare phenomenon that is well documented. If you missed it or if you are lucky enough to have seen it before and want to see it again, you can find videos of the event at any time at their website. It happens like clockwork, so start planning for a trip next year! Mantas are famous because of their sheer size, majestic movements through the water, and gentle manner. The largest species of ray in the ocean, their wingspans can reach upwards of 29 feet from fin tip to fin tip and adults can weigh as much as 3,600 pounds. These rays are a common sight in and near the sanctuary and are a highlight for divers lucky enough to lay eyes on one. They’re an amazing species to see up close and recent research confirmed Flower Garden Banks as an area that serves as critical nursery habitat for oceanic manta rays. Sanctuary waters offer young mantas protections from human activity and the sanctuary continues to work towards the conservation of manta rays through expansion of the habitat. Less common than manta rays but just as awe-inspiring are spotted eagle rays. They school in and around the sanctuary during the early part of the year. They have a pronounced head with a snout and distinct white spots and rings on their dark backs which make them unmistakable. They also have incredibly long whip-like tails, longer than most other rays, with venomous spines used in defense when they are threatened. They can also grow to have wingspans of nearly 16 feet but are still smaller than manta rays. Divers and boat passengers can enjoy these animals as they often leap out of the water, though scientists aren’t sure why.

Flower Garden Banks National Marine Sanctuary hosts so many incredible opportunities to learn about and experience marine life and underwater geology that it was hard for us to pick just five! To learn more about the sanctuary, the wonders it protects, and upcoming events, visit the Flower Garden Banks website. 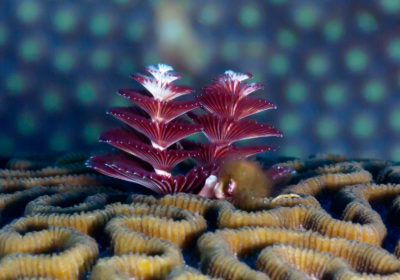