The common snapping turtle (Chelydra serpentina) is a species of freshwater turtle that spends most of its life in the water. If you see one in its habitat, look, but don’t touch! As its name suggests, it can’t bark but it can bite using its powerful set of jaws and extendable neck. Not to worry, though, they’re generally harmless unless they are out of the water and feeling threatened.

Common snapping turtles are one of the larger species of freshwater turtles. When fully grown, they can reach lengths of eight to 14 inches, though the largest observed individual reached 20 inches. On average, they weigh between 10 and 35 pounds, but can reach a maximum of 75 pounds. Their skin is dark brown and reddish and rough, and their shells are covered in moss and other growth, which is the result of their slow-moving lifestyle and helps them blend into their surroundings. Their necks extend and swivel, giving them a snake-like appearance, and their top jaw is curved and pointed, complimenting force with form that can both intimidate and ward off potential predators and grasp their prey with ease. At the top of their snouts are two nostrils, which they use like snorkels to breathe without having to leave the water. They have four legs with long claws and a long tail at the end of their bodies.

Common snapping turtles are omnivores that feed on aquatic vegetation, fish, amphibians, reptiles, small mammals, and invertebrates like insects and worms. They are opportunistic feeders that eat whatever is easiest to find and catch, feeding less in the colder months of the year when they slow their metabolisms. Their powerful jaws help them rip leaves and other plant matter from its base or from the ground, and helps them to catch, crush, and swallow animals in a quick flash. Young turtles tend to forage and graze on foliage as they develop the skills to hunt as they get older. Older turtles will feed more often on animals using an ambush strategy that involves remaining very still, waiting for prey to pass by before lunging their necks forward and snapping their jaws to catch prey in an instant. A snapping turtle diving down in Thunder Bay National Marine Sanctuary. Snapping turtles are powerful swimmers, but they will frequently walk along the bottom. Photo: James Garner

Common snapping turtles live throughout the North American continent, ranging from the Rocky Mountains to the East Coast and from southern Canada to the Gulf of Mexico. They live in fresh and brackish waters that are slower moving and that have soft muddy or sandy bottoms. Examples include rivers, lakes, estuaries, ponds, and streams. Unlike most other turtles, this species spends very little time basking on land. Instead, they rest close to the water’s surface with their skin and shell exposed to warm their bodies.

They are not migratory animals but can travel long distances on land for breeding purposes. In the winter, they bury themselves in the sediment, cover themselves with foliage, or hide under logs to stay warm. Within the National Marine Sanctuary System, we find common snapping turtles in and near Thunder Bay, Gray’s Reef, and Mallows Bay-Potomac national marine sanctuaries.

Common snapping turtles hatch from eggs buried in mud or other soft sediments after three to six months of incubation. Adults mate in the warmer months of the year beginning in April and can lay eggs as late as November if they live in warmer areas of North America. Hatching peaks between August and October throughout the species’ range.

Since they often live alone or among small groups of individuals, adult snapping turtles travel for breeding season, behavior that occurs primarily on dry land. Males may mate with multiple females and each female can lay between 20 and 40 eggs per season. As is the case with other species of turtles, the incubation temperature of the nest throughout development determines the sex of each hatchling; warmer temperatures produce females and cooler temperatures produce males. This means warmer temperatures can produce a gender imbalance and affect the reproductive success of the population in the future.

Hatchlings leave their nests almost immediately and begin their independent lives in the nearest water source. Nearly nine out of 10 hatchlings are eaten by larger predators during this time. The few that survive the first few weeks and months generally settle in an area near their hatching site and remain throughout their juvenile life stage. They reach sexual maturity when their carapace (back ridge of their shells) measures about eight inches long, which occurs at around four or five years old for males and at seven or eight years old for females. The maximum lifespan of a common snapping turtle is about 45 years old, but the average in their natural setting is closer to 30. The species is highly adaptable and is resilient to rapid changes in the environment such as habitat changes or human encroachment resulting from development activities. As a result, the species is seen as ecologically successful.

In many areas of the United States, common snapping turtles can be a source of food, though the scale of subsistence hunting appears to be sustainable and not harmful to the population. This could change if other threats reduce populations to a level where removal of individuals for human consumption could threaten their reproductive success. Additionally, turtles traveling on land during the breeding season are often hit by cars or other vehicles. Other threats to the species include pollution, habitat destruction, food scarcity, and temperature changes associated with climate change. The International Union for Conservation of Nature (IUCN) Red List considers common snapping turtles a Species of Least Concern.

A juvenile snapping turtle in the Chesapeake Bay. Juveniles prefer shallow waters where there is a lot of submerged vegetation for food. Photo: Mary Hollinger 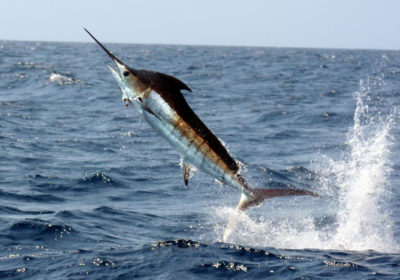