There on the windward side of Oahu, near the majestic Koʻolau mountains along the eastern half of Oʻahu, lies the ahupuaʻa (a traditional land division) of Heʻeia. Heʻeia is often seen as being green and lush with an abundance of water. The waters that feed this area arise from the mountains and from numerous springs that are found there.

In traditional times, Heʻeia represented one of the most extensive areas of wetland taro cultivation on Oʻahu. Taro is one of the most important food sources for Hawaiians. For this wetland taro cultivation to occur, there needs to be an abundance of cool, clean and flowing water. The Heʻeia Stream provided much of the water to the 300 acres of taro in He’eia. As the stream flowed from the mountains and through the wetland providing sustenance to the taro, it then made its way towards the coastline feeding the estuary. The estuaries, or muliwai in Hawaiian, are nursery grounds for many important coastal species that are valued for fishing and cultural practices as well as biological diversity. In 1922, mangroves were introduced to Heʻeia to control erosion and stabilize sediment. However, these trees began to spread quickly throughout the wetland and soon dominated the coastline pushing out native flora and fauna. The mangroves had changed the ecosystem of Heʻeia from an open wetland and estuary into a swamp. The trees began to encroach on waterways and choke off the stream, therefore cutting off the lifeline for many native species.

Mangroves are known to provide numerous benefits, but here in Hawaiʻi they are an invasive species.  Mangroves not only outcompete native species but also degrade the shoreline, disrupt natural flow of streams and create stagnant and anoxic (low oxygen) conditions that are detrimental to our native Hawaiian plants, animals and overall ecosystem.

With support from the National Marine Sanctuary Foundation, Kākoʻo ʻŌiwi, a 501(c)(3) community non-profit, manages more than 400 acres of wetlands in Heʻeia. We are shaping restoration and conservation through Native Hawaiian management practices by removing invasive mangrove and reintroducing traditional agriculture systems and other lowland crops. These Native Hawaiian agriculture systems act as “sediment retention basins” by holding water and sediment on the land instead of in the sea. These traditional agriculture practices not only provide an ecosystem service by holding sediment and enhancing ecological productivity of native species, but also provide food for the community. An area where mangroves were recently removed. As the mangroves are removed, it allows water to move and flow which is essential for native Hawaiian aquatic species. The freshwater that flows from these streams provides the necessary nutrients for a healthy estuary. Photo Credit: Melissa Mau

Kākoʻo ʻŌiwi is a living classroom that provides hands-on learning programs for youth and families that encompasses the land, the ocean, and the environment. In 2017, the National Oceanic and Atmospheric Administration (NOAA) named He‘eia a National Estuarine Research Reserve, a designation that not only provides support through federal funding for research and education but also supports traditional and contemporary practices embodied in a vision where both human and natural communities thrive.

Not that long ago, the wetlands of Heʻeia sat under a canopy of invasive vegetation. Water was stagnant and there was little to no native life present. Today, with the support of the National Marine Sanctuary Foundation, the wetlands of Heʻeia reveal life. There is still much work to do but there are signs that we are on the right path. There are native birds nesting here once again — a phenomenon that hasn’t happened for several decades. Today there are approximately 25 Hawaiian moorhens and 11 Hawaiian stilts — both of which are endangered species. More than 1000 native plants have been planted out in the wetlands and as invasive vegetation continues to be cleared away we see native plants emerging on their own.  Native fish are returning to the streams and water is flowing once again and with it brings life.

Mahalo nui to the National Marine Sanctuary Foundation, NOAA, and to Kākoʻo ʻŌiwi’s several partners who continue to support this work. Not only are you supporting the restoration of essential habitat and coastline, but you’re supporting culture, education and the well-being of communities. 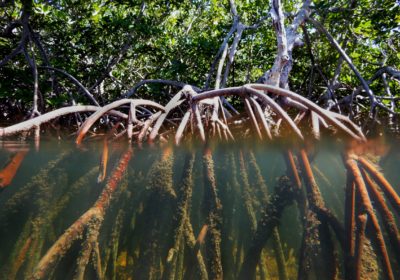 Restore our Blue Planet: Building Back Bluer in our National Marine Sanctuaries