Established in 1992, the Quileute Tribal School is a kindergarten through 12th grade Compact Tribal School located in La Push, Washington. The Quileute Tribal School is recognized as one of NOAA’s Ocean Guardian Schools. The Ocean Guardian School program provides small grants to K-12 schools around the United States to carry out school and community-based stewardship projects that protect and conserve their local watersheds and the ocean including special ocean areas like national marine sanctuaries.

Each Ocean Guardian School leads projects that are connected to one of the five ocean and climate literacy pathways: Refuse, Reduce, Reuse, Recycle, Rot; Marine Debris; Restoration; Schoolyard Garden/Habitat; and Energy & Ocean Health. The Quileute Tribal School follows the Restoration pathway and connects students to their local watershed and the nearby Olympic Coast National Marine Sanctuary. The National Marine Sanctuary Foundation supports the program by funding Ocean Guardian School projects and the resources necessary to learn about their ocean. The Quileute Tribal School’s Ocean Guardian program began last year as a watershed restoration project at the construction site of their soon-to-be new school. Since the start of the project, students have learned about native plants, plant and macroinvertebrate biodiversity data collection, and how to perform water quality testing. Due to COVID-19, the Ocean Guardian project and the construction of the new school has been delayed. Rather than accept defeat, the school extended the program into the next year and the students have remained dedicated to the project. On March 17th, before the shutdown of schools, students Chenoa Black, Ruby Sheriff, and Kevin Ryan worked with staff members Margery Marshall, Ben Nye and Alice Ryan, to ensure their plants and project survived their absence. This school year, to keep the project alive until they return, students in first grade and fifth through twelfth grade are transplanting the plants to their own homes or to the new school site depending on ongoing health guidelines.

Throughout the pandemic, the students have continued their hard work on behalf of the ocean and their community. “One of our seniors is even applying to continue her education in Environmental or Marine and Coastal Sciences,” said Alice Ryan, Science Teacher at the Quileute Tribal School. “So these steps that we are taking now will have an effect long into the future.”

What does being an Ocean Guardian School/student mean to you?

Ruby (7th Grade): Being an Ocean Guardian student is very awesome because I want to be involved with natural resource activities. I am a Hoh Tribal member. We are stewards of a land and sea with trees, streams, and fish. I plan on going further in natural resources or pursuing tribal government as a career.

Gabe (10th Grade): To me being an Ocean Guardian School means protecting the environment to the best of our abilities, and trying to make sure others do as well.

Shaleigha (10th Grade): Being an Ocean Guardian School means that future classes can have cleaner beaches and plant some native plants in the area.

Jordan (11th Grade): It means that I can help keep our oceans clean, and protect the sea life.

Can you describe your Ocean Guardian project? What is your favorite part about the program?

David (8th Grade): My favorite part is that I get to learn alot about the ocean.

Gabe (10th Grade): Our ocean guardian project mostly consists of cleaning and restoring the environment, with a focus on the area around the new school grounds due to the debris.

Shaleigha (10th Grade): My favorite part about the program is how it works to help climate change and pollution.

Ruby (12th Grade): Our project is to keep the animals’ habitat healthy. Our project topic is watershed restoration so we went out and planted trees and other native plants, like salmonberry bushes and huckleberries, in our new school site. This year, due to COVID-19, we are planting individual plants from home. What advice do you have for other students who want to start taking steps to protect our ocean?

Chastity (7th Grade): Throw away your own trash too.

Shaleigha (10th Grade): Stop littering on the beach, it is putting sea animals at risk and it can take hundreds of years for plastic to break down.

Jordan (11th Grade): Help clean the areas around the ocean, whenever you see garbage, to protect our sea life.

Ruby (12th Grade): Help with any activity that involves the Ocean Guardian project! It’s super fun and you can make fun memories with friends. Get involved with National Marine Sanctuary activities.

What role does Olympic Coast National Marine Sanctuary play in your community? How has it affected your own personal connection with the ocean?

Gabe (10th Grade): One way that I don’t think most people realize helps them keep these waters clean is the extensive education and cultural background with the ocean and rivers in the area.

Hayden (10th Grade): I have loved the ocean since I was a kid. When I look at it, I sing native songs.

Shaleigha (10th Grade): It has affected my community in a positive way because it will help with plastic pollution in the waters.

Jordan (11th Grade): We have fisheries, the Quileute Natural Resources (QNR), and they go do these things called fish checks which help protect our fish by checking up on them.

Ruby (12th Grade): Living right on the coast, where one location of the Marine Sanctuary is, the role it plays in my community is helping us Hoh tribal members. It helps by protecting our connection we have with our ocean; the ocean holds our food we gather and has healing purposes. The marine sanctuary has personally affected my connection with the ocean in a positive way, it allows me and my family to continue and carry on our ways of gathering to the next generation.

What actions can everyone take to make sure we center stories on Native American perspective and better amplify indigenous voices moving forward?

Chastity (7th grade): More often pass down our teachings to the next generation.

Hayden (10th Grade): Remove garbage from our beaches and recycle.

Shaleigha (10th Grade): The actions people can take are asking other Native Americans their perspective on matters relating to this subject.

Jordan (11th Grade): They can ask how we take care of our fish, and what our part is. Our community does a lot to help our fish.

Ruby (12th Grade): Actions that can be done to center stories on Native American perspectives is making sure that someone is keeping contact with tribal entities, so that their voices are heard, dedicating a seat or spot to Native Americans to get a better understanding of the cultures around the sanctuaries, and  involving the native youth! Involving the youth now is a good idea because in the future they will have the seats and knowledge to help protect our cultural ways and the water. 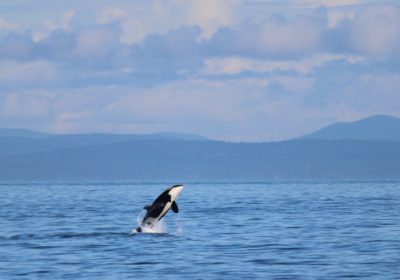